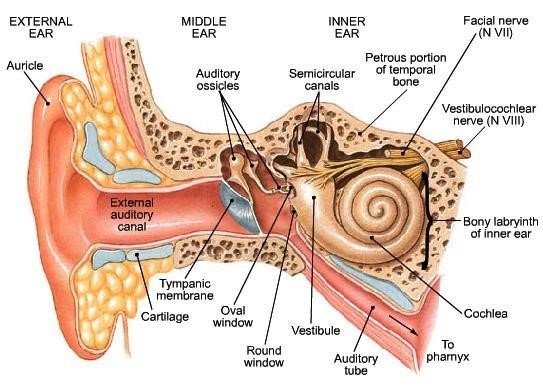 So, how do we hear sounds?

The sounds we hear are airborne.
Sound has to have a source which vibrates the air to create the initial sound wave. It also has to vibrate against something in order to travel.

In air, an individual air molecule knocks into its neighbour transferring its energy in a wave until either the energy is expended or the wave hits another object.
Of course sound transfers through mediums other than air. The more dense the object the faster the speed, so that a sound wave travelling along a metal rail will travel faster and further than a sound wave travelling through air, and both will be better than travelling through treacle!

The further a sound wave travels the more it dissipates and weakens, like ripples in a pond, and the higher the frequency the weaker sound wave.
So a low frequency fog horn will maintain its strength and travel for miles, whereas rustling leaves will be inaudible from a few dozen feet away.

Since sound has to have the capability of exciting the sense of hearing, we need a mechanism to process it. Something for it to vibrate against.

Our Outer ear, or Pinna collects the sound wave and transfers it down the ear canal towards the ear drum. As long as there is no wax inhibiting the sound wave 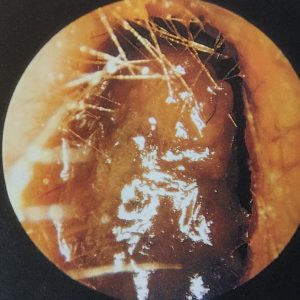 it will reach the eardrum which vibrates as each air molecule strikes it.

On the reverse of the eardrum, in the middle ear, is the first of the three smallest bones in the body, the Malleus, followed by the Incus and Stapes, or Hammer, then Anvil and Stirrup. These work as a lever mechanism, amplifying the sound wave before it transfers through a membrane into the inner ear, known as the cochlea.

Hertz is a unit used for measuring the frequency of sound waves, it represents one cycle or wave per second. Our ears can process vibrations between 20 to 20,000 Hertz. Vowel sounds are low frequencies measured in the hundreds of Hertz, whereas consonants are higher, in the thousands of Hertz.

The more powerful low frequencies swamp the weaker high frequency consonants which is why the clarity gets lost in the hubbub of a noisy room, and so as our high frequency hearing fails we progressively struggle to hear in background noise.

As the sound wave transfers down the cochlea, it moves a series of as many as 20,000 microscopic hairs up onto a membrane creating a series electrical nerve impulses similar to a chord being played on a piano. Our brain has a memory for literally millions of sounds, and it processes the frequencies heard in the sound waves, transferring them into a recognisable sound for us.

In most cases people will lose the higher frequency clarity based hairs first, either through noise, strong medication or. more usually, wear and tear caused by ageing.

The more damage we have to the microscopic hairs, the fewer frequencies and therefore less information we have available to us. It is for this reason, the hard of hearing can perceive sounds but not identify exactly what the sound is. We hear the noise of speech but not enough of the weaker and softer higher frequency consonants to identify all the sound in a word.

If you or someone you know is showing signs of missing speech clarity, contact us to see how we can help.

Address
Based in Edwinstowe House, Edwinstowe NG21 9PR near Newark on Trent, covering the East Midlands and surrounding areas, we can also visit you in your own home.
Hear well in your own environment.