Use It, Preserve It or Lose It

Hearing a sound does not mean you can understand it.

If someone speaks to you in a language you are not familiar with, it is simply processed as noise as far as your brain is concerned. Even if you were good a speaking it a few years ago, lack of practice means you will slowly but surely forget it. All languages are just variations on the same frequencies used in English. If your hearing is impaired you lose some of the frequencies and so don’t recognise the combination you have heard exactly in the same way that you forget the foreign language.

Different pitches  at varying volumes create the individual sound. Several of these make up each letter we hear, especially complex versions of these sounds make up words.

Below are the images of the word SOUND.
It is made up of four portions. S-OW-N-D.

The most common hearing losses result in losing the higher frequencies. In the example above the ‘S’  would go first followed by the ‘N’ and ‘D’ finally the ‘O’ would disappear.

The job of a hearing aid is to amplify the individual sounds by enough so that we hear them normally again…. BUT…… 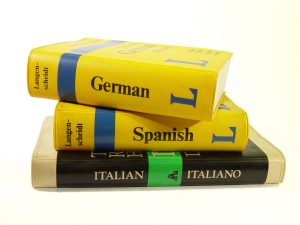 ….The longer someone goes without hearing all the frequencies of speech properly, the more they will forget it. In exactly as we forget a foreign language when we don’t practice regularly. Simply travelling abroad won’t instantly re-create the ability to speak the local language.

…. We have to invest time and perseverance to relearn the foreign language we have forgotten.

Simply having hearing aids, no matter how good they are, will not suddenly create the ability to process the sounds we have forgotten. When we hear missing frequencies for the first time our brain will still process them as noise. It needs to re-associate the frequency with a meaning.  Gradually, as with foreign languages, we learn sounds the and start to hear the words we have forgotten and whilst it might appear weird that we need to relearn our own language – it is precisely that process that we undertake when learning a different language, or training our fingers to play a musical instrument.

It takes time, however investing that time to follow a relearning, rehabilitation process will result in much more benefit from hearing aids in the long term and much less frustration in the initial stages.

If you are hearing more or less than you want please

Address
Based in Edwinstowe House, Edwinstowe NG21 9PR near Newark on Trent, covering the East Midlands and surrounding areas, we can also visit you in your own home.
Hear well in your own environment.